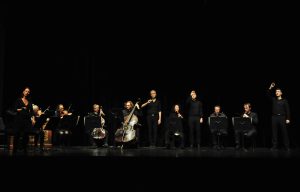 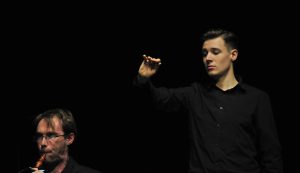 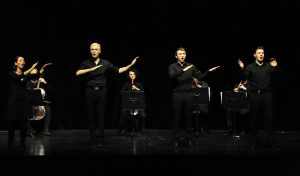 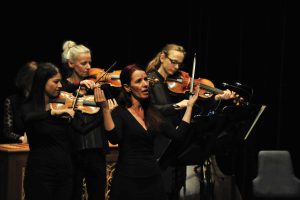 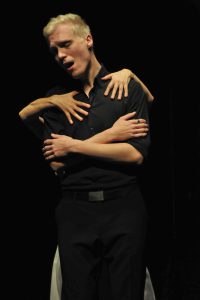 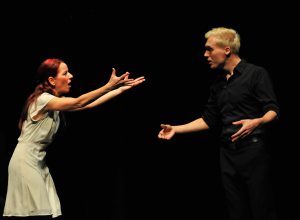 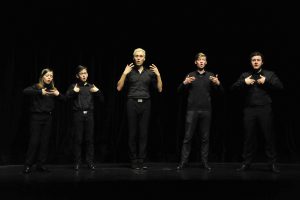 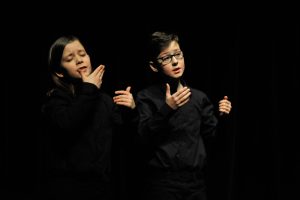 The project „Listening with the eyes“ is an inclusion project, because the ensemble SING&SIGN consists of hearing and hearing-impaired actors. It makes sacred music accessible to hearing-impaired people, since this kind of music, which is an essential part of our culture, is hardly accessible to them. To counteract this, the soprano Susanne Haupt founded the ensemble and performs sacred music audiovisually with signs and other visualizations without barriers. Together with a baroque orchestra under the musical direction of Thomas Stadler and the pantomime director Lionel Ménard. The focus is on the music of Johann Sebastian Bach. Because perspective is to be established in the Bachstadt Leipzig annually a barrier-free Passion and a barrier-free Weihnachtsoratorium. However, the ensemble also devotes itself to other composers. The visual representation of the sung word and the played music is always in unity with the emotionality of the respective work.

The singers sign the text parallel to the singing. However, the signs, which correspond to German sign language, do not simply translate the text, they also show the polyphonic structures and have an emotional effect that can „make music visible“ not only for the hearing impaired, but also for hearing people.

The texts are translated and learned in German Sign Language (DGS) in cooperation with hearing impaired native speakers and sign language interpreters. The difficulty is that sign language differs in sentence structure and position from the grammar of spoken language.

Hearing singers therefore use German Sign Language signs as close to DGS as possible when singing. The complex musical structure of the compositions is also visualized.

Thus, communication is done in a mix of spoken language, DGS and DGS-like translations, which again corresponds to the heterogeneity of the deaf community.

In the case of purely instrumental parts, the singers visualize parameters and motifs with signs in order to represent not only the text, but the entire music. Scenic presentation and interaction with the audience are also part of the performances.

In order to make concert visits as barrier-free as possible, the content is communicated on three levels: the texts are presented with sign language and scenically, and the text can also be viewed in the program booklet.

A concert should be a benefit for hearing and hearing-impaired people, as it is within the ensemble.

Hearing-impaired people, regardless of whether they are deaf from birth or have only become hard of hearing or deaf over time, or suffer from a processing and perception disorder, cannot perceive music at all or only to a limited extent, partly through vibrations in the room, hearing implants or through their remaining hearing power. Through translations and visualization, for example, they receive support in classifying perceived sounds, auditory memory in the case of loss of hearing power, or a general insight into the language and culture of music. In particular, access to the sometimes challenging, complex structure of compositions and the historical, Christian and sometimes difficult to understand content should be made possible.

Hearing people are supported in the differentiated hearing of the individual voices through the visualization by means of signs. The signs make the polyphony visible and thus give the music an additional dimension of experience and emotional depth. The hearing audience is given a glimpse into the language and culture of the hearing impaired, but is also made aware of isolation, lack of understanding and audism, i.e. discrimination against the hearing impaired, which is mostly caused by communication barriers and thus ignorance. A portion of the concert proceeds will be used to support the deaf community.

The ensemble finds signing together very gratifying and the idea that hearing singers exclusively make music and the hearing impaired sing alongside them is an image of separation and not of connection for the ensemble.

Also, out of respect for sign language culture, hearing singers want to communicate directly with the sign language community in the area of music, even if they are language beginners. Signs are meant to make music visible and tangible, in turn giving something back to those from whom the hearing learn the language. In this way, an exchange can flow between music culture and deaf culture.

Because the intention of this project is to connect two cultures. A change of perspective should be stimulated for both sides, barriers should be broken down and bridges should be built in order to approach each other and to exchange ideas and thereby to get to know and understand each other better, to open up for each other and to focus on what connects them.